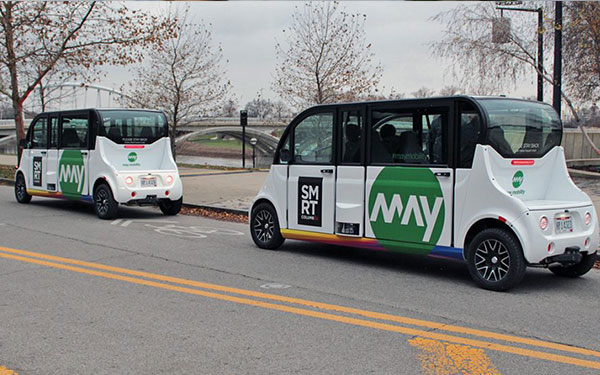 The end is near for the Smart Circuit, the driverless shuttle that has been operating in Downtown Columbus since last December. Jennifer Fening, a spokesperson for Smart Columbus, said that the contract with the shuttle’s operator – May Mobility – is nearly up and that the last day to take a ride on one of the five-passenger vehicles will be September 27.

“The shuttle has welcomed more than 15,000 riders and has given our team real-world experience applying self-driving vehicle technology,” said Fening. “Our many learnings from this demonstration have helped to inform the operation of the self-driving shuttle that Smart Columbus will launch in Linden late this year.”

In other transportation news:

An Irish startup has chosen Columbus as the launch city for its WINIcabs app. Available now for iOS and Android, the app is designed to combine some of the convenience of Uber and Lyft with the security of traditional taxi operators. As a press release states, it “combines Columbus’ taxi fleets under one app, putting the city’s extensive network of licensed, background-checked drivers at riders’ fingertips.”

All Aboard Ohio is holding its fall meeting on September 28 in Columbus. Representatives of the Mid-Ohio Regional Planning Commission (MORPC), the Midwest Interstate Passenger Rail Commission, the Ohio Rail Development Commission, Transit Columbus and others will be on hand to discuss the latest developments in the rail and transit world.

Age-Friendly Columbus recently announced the launch of a multi-faceted approach to improving mobility for seniors. One element of the program is a new, a free transit option called the Hilltop Circulator, which will offer rides to a range of locations, including the Hilltop YMCA, the Hilltop library branch, Westgate Recreation Center and Walgreens Pharmacy. Another circulator is planned for the Clintonville area.

A new program designed to provide affordable late-night transportation for Ohio State students launched in August. Called Lyft Ride Smart, the program offers five-dollar discounts (paid by OSU) on Lyft rides booked between 9 p.m. and 3 a.m. The rides need to be within a designated service area (which consists of the neighbourhoods surrounding campus) and to be eligible, students must select “shared ride” in the Lyft app. A limit of 10,000 discounted rides per month will be provided by OSU.

The advocacy organization America Walks is bringing its National Walking Summit to Columbus on September 24. Called Places for People, the event is also sponsored by MORPC and will feature local and national speakers. MORPC’s annual Summit on Sustainability takes place on October 11.